Back to Tips Page

If you thought this was just some stuff used by children who watch Blue Peter, have another think!

I first used it on my Miraj, to stick the servos to the ply tray, which is then slid into the fuselage and secured with two screws. First I marked the position I thought they ought to be, and stuck them temporarily with double sided carpet tape, then did a trial fit. After a bit of adjustment to get everything moving OK without hitting the servo next door (everything is a bit tight inside the narrow fus) I wanted to fix them permanently without disturbing their position. I hit on the idea of simply running a fillet of hot melt glue round each servo. That worked fine. It held the servos in position securely on the tray, but when I wanted to remove one to fit a new gear set, I found I could easily pick off the glue with a knife blade. 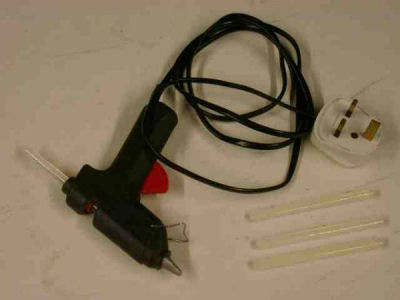 It sticks most things to most other things, and I have since found that the glue melts at a lower temperature than polystyrene foam or Depron, so other uses are:

And anything else you can think of. It’s limited - not much use generally for building structures, because it sets too quickly. Also it has an annoying tendency to leave a fine thread of the stuff when you pull the gun away, which gets everywhere.

You can buy the gun, complete with half a dozen or so glue sticks for around sick squid from the local cheapo shop, and another dozen sticks goes for another 60p.

Back to Tips Page